The Best Gambling Movies of All times

The plots of many of the best films about gambling are remarkably similar. It’s not uncommon for these films to focus on a single genre and be made on a shoestring budget, but they have a special place in the hearts of gamblers everywhere.

Perhaps a lack of recognition is what makes a film a cult classic, as only one of these gambling films has been inducted into the National Film Registry and only two have won Oscars.

For now, you can start checking them off your ‘ones to watch’ list on services like Netflix and YouTube in the hopes that the Library of Congress will save any more of these gambling movies in the future. In order to get that sense of adrenaline for what it’s like to play a casino game or to make bets on online sportsbook software, these are the best movies about gambling to watch. The first GOAT gambling movie on our list is the California Split Movie of 1974. California Split, starring Elliot Gould and George Segal, is a great buddy movie and one of Robert Altman’s most under-appreciated works. Trying to figure out if Segal made a fortune or lost a fortune is part of the fun, because his worried expression never changes. 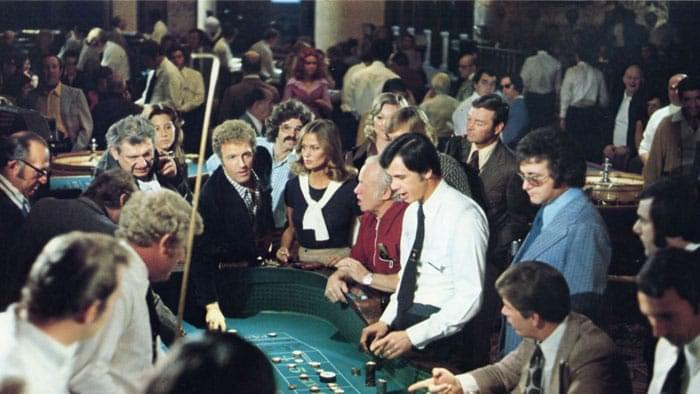 The Gambler, aptly titled, tells the story of a university professor who is addicted to casino gambling. As the film progresses, we see Caan’s character descend into self-destruction and his mental state deteriorate.

The film builds to a brilliant climax as his borrowing worsens and his need for thrills threatens to endanger his life. This 1974 film about a gambler serves as a classic warning against gambling addiction – no matter what kind it may be – and to always gamble responsibly. Do not waste your time with the 2014 Mark Wahlberg-directed re-make.

In my opinion, Martin Scorsese is not a gambler. Even though the movie is titled Casino, he doesn’t appear to be interested in gambling establishments. Because he’s fascinated by people, and because he’s working with two outlandish mobster characters and two eccentric actors (Robert De Niro and Joe Pesci), he’s in a great position to create another classic character study. Wake in Fright, an eccentric psychological thriller set in Australia, depicts a man who loses all of his money gambling and ends up drinking and fighting kangaroos. Gary Bond, a teacher desperate to pay off his debt to the government and leave his job, looks like he and Robert Redford were separated at birth.

Gary gets disoriented by a betting winning streak in a freaky town called The Yabba and ends up losing all of his money. Confused and not knowing what to do, he finds himself in a sinister series of trippy rabbit holes; the kind that you’ve never seen anywhere in gambling films.

Tracking down a true-crime gambling movie that’s also full of tension, excitement, and comic relief can  be a daunting task. However, you can get all of this and more in Robert Luketic’s classic film 21. The combination of gravity and levity in this film makes it a worthy addition to this list.

An  unconventional math professor, Micky Rosa (Kevin Spacey), teaches six MIT students how to count cards. This one is based on a true story. After that, they go down to win millions of dollars at the Strip casinos playing blackjack. They also take numerous weekend trips to Sin City.

The story of Ben Campbell (played by Jim Sturgess), a gifted student and an aspirant doctor, is one of the most heartwarming. Ben joins the card-counting team because he doesn’t have the $300,000 needed to attend Harvard Medical School. The students’ plan was put in jeopardy when they succumbed to the temptations of power and greed.

The Hangover is a humorous parody of the gamblers’ axiom, “What happens in Vegas, stays in Vegas.” Gambling scenes are sprinkled throughout the film, but the movie itself isn’t focused on it. The Hangover isn’t bad, and it has a slew of well-known actors in it.

There are many mishaps in Doug (Justin Bartha) story with his three friends, Alan, Stu, and Phil. Two days before Doug’s wedding, the oddball crew decides to go to Las Vegas for a bachelor party there.

On the other hand, the three wake up the next morning with no recollection of what happened the night before. Worst part? The groom was also nowhere to be found.

Now is the time. Less than a day before their friend’s wedding, the three groomsmen must pool their resources and try to locate him.

Its huge success led to more sequels in 2011 and 2013, respectively. It’s hilarious, but it also provides an exaggerated view of Las Vegas and its enormous casinos. I can’t wait for the release of Hangover IV.

Even though we’ve come to the end of our list, it doesn’t preclude the existence of other noteworthy films about gambling. These are some of the best gambling films ever made, and we’re confident you’ll enjoy watching them while you wait for our next post of more GOAT gambling films! So, put these films on your list of must-sees and savor them all.