Sometimes I Think About Dying

SUNDANCE FILM FESTIVAL 2023 REVIEW! Director Rachel Lambert’s low-key yet compelling drama Sometimes I Think About Dying serves as a formidable showcase for the acting talents of Daisy Ridley. Normally, an indie gem like this comes before the discovery of an actor and then propels them to stardom and big-budget fare. In Ridley’s unconventional case, however, she was thrust into the largest cinematic franchise of all time with next-to-no features on her resume. But now, the opportunity to truly display what she’s capable of has arrived. It’s an earnest movie with humble ambitions, but Ridley single-handedly turns it into something special.

Ridley plays Fran, who leads the quietest of lives in a small coastal town. The weather’s perpetually gray, its cacophony of seagulls incessant. Fran follows a bleak routine: arriving at the office every weekday to spend it listening to – never participating in – all the inconsequential small talk. She likes to imagine herself dead, her body sprawled in the woods or amongst logs on the beach. Her visions are as romanticized as they are dour.

One day, the outwardly happy-go-lucky Robert (Dave Merheje) arrives to replace a former coworker. Fran finds herself engaging in conversation with him, on IM at first, then in person. He infiltrates her vaguely suicidal visions. Fran agrees to go to the movies with Robert. This turns into a date, which turns into more. Of course, inevitable complications arise as his past surfaces, and her impenetrability becomes a factor. 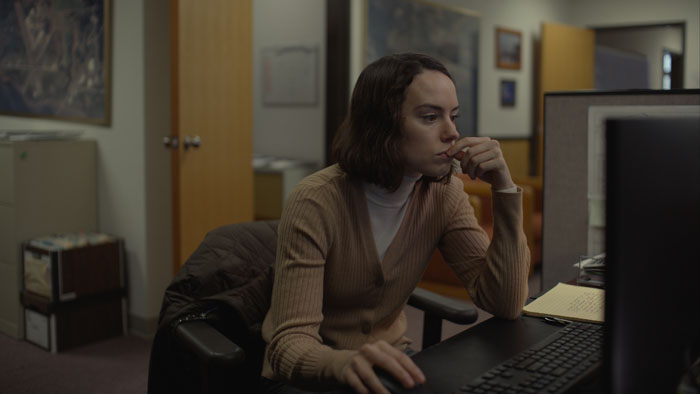 Daisy Ridley appears in a still from Sometimes I Think About Dying by Rachel Lambert, an official selection of the U.S. Dramatic Competition at the 2023 Sundance Film Festival. Courtesy of Sundance Institute | photo by Dustin Lane

“Fran agrees to go to the movies with Robert.”

Writers Stefanie Abel Horowitz, Kevin Armento, and Katy Wright-Mead elegantly handle the deeply minimalist story at the core of Sometimes I Think About Dying. The dialogue between the most introverted person anyone could imagine and a hard extrovert is both tender and a little awkward and resonates. It’s tough to name a standout sequence in a motion picture that doesn’t aim to necessarily do so. Yet, it’s probably a tie between a “murder game” at a party that also involves cracking crabs and a touching conversation between Fran and a heartbroken retiree named Carol (Marcia DeBonis) at a café.

Daisy Ridley is splendid. “Hi, I’m Fran. I like cottage cheese,” her mousy character introduces herself at an office meeting. Little, if anything, is revealed about her, but the actor imbues the role with just a spark of trauma, as well as a growing eagerness to embrace things outside her morbid little comfort zone. Dave Merheje provides a welcome contrast, an infusion of joie de vivre and humanity that prove irresistible. They play off each other better than you can imagine.

Sometimes I Think About Dying sublimely portrays the monotony/minutiae of cubicle life. Lambert and her team emphasize the importance of human connection, living each day as if it were your last. These themes may not be novel. The narrative may prove a bit indeterminate and slow-moving to jaded audiences. Yet it remains an incisive and unusual little tale, which we could certainly use more of these days. That is something I personally think about all the time.

Sometimes I Think About Dying screened at the 2023 Sundance Film Festival. 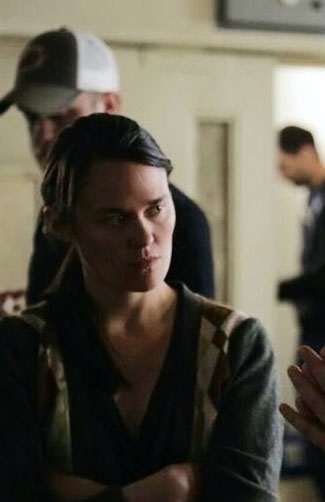 "…an incisive and unusual little tale..."