Christian Sparkes’s drama Hammer opens with a pair of situations that, as different as they appear on the surface, are weighted with the same sense of impending tragedy.

The first is a criminal act: a disheveled young man, Chris (Mark O’Brien), drives out to a meeting spot deep in the woods for a drug deal with his volatile old friend and former partner, Adams (Ben Cotton).

The other is domestic, commonplace: middle-aged suburbanite Stephen (Will Patton) makes up some hasty excuses to avoid an argument with his wife (Vickie Papavs) about the well-being of her elderly father. 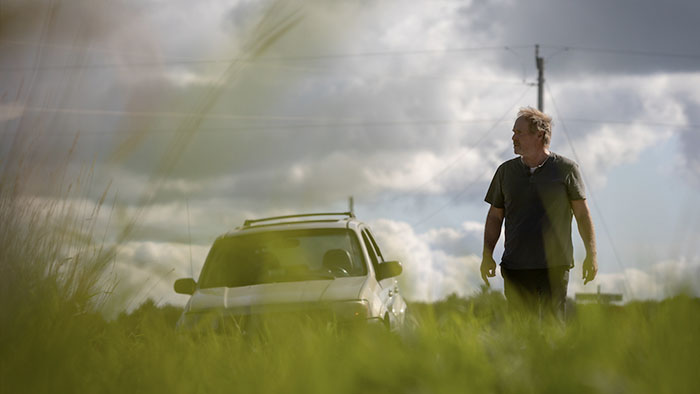 “…Chris’s deal devolves into betrayal and violence, and he becomes targeted by Adams…”

Sparkes fills both of these scenes with an almost religious portent, repressed feelings, and old resentments that threaten to rise to the surface. It may only be the former in which lives are at stake, but each carries the unmistakable feeling that something devastating lies just down the road. We barely know these characters yet, and already, their fates seem sealed.

At first, it’s impossible to tell how these two stories are related, but before long, a chance encounter reveals that connection. Stephen and Chris are father and son, long estranged after a years-ago falling out involving Chris’s criminal history. They’re unexpectedly reunited when Chris’s deal devolves into betrayal and violence, and he becomes targeted by Adams – who’s out to exact revenge not only on Chris but also on his younger brother, Jeremy (Connor Price). Stephen, blindsided by all of this, soon becomes a reluctant participant in his troubled son’s desperate, shortsighted attempts to set things right.

Hammer has the mechanics of a hard-edged noir thriller, which work startlingly well, but it’s clear that Sparkes’s heart, and therefore the film’s, is centered on the distressed familial relationships. What’s remarkable about Sparkes as a writer and director is his keen ability to explore the poor judgment and unspoken regrets that shape this uneasy father/son dynamic – without compromising the tension and forward momentum of his sharply drawn narrative.